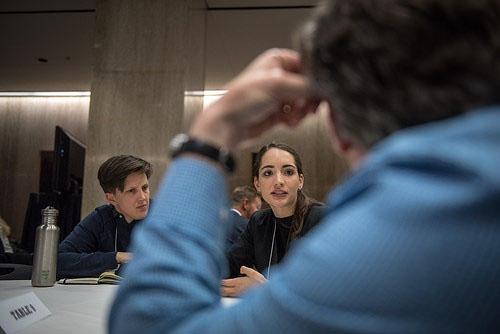 In the sales world, you will find many gurus who frenzy around the world “Social Selling. They will tell you the following things:

It is total rubbish.

I love social media and use it daily to open new relationships and deepen ones I’ve had. Many of my new clients come from long-standing relationships I began on social media. Social media has empowered the prospecting sales person and allowed them to generate their own leads no matter what their marketing department does. It has transformed the lives of those who sell in B2B in industries with little to no marketing (yes, those exist). But it hasn’t made the phone call or in-person meeting obsolete. As a matter of fact, because of the lazy or scared ‘sales professionals’ who rely too much on social media, the sale pro who picks up the phone or makes the in-person meeting can blow the doors off of their competition.

New Relationships that Sprout on the Phone

Hearing someone’s voice is dramatically different than reading a text. If you’ve ever had a Facebook friend who you communicated with solely through text for a lengthy amount of time and then you hear their voice, you may have experienced how your image of them changes when you can match a voice to a picture. Often, your relationship deepens and becomes “more real.”

Robert Krauss, in his The Psychology of Verbal Communication at Columbia University, determined that,

At a fundamental level verbal messages convey meanings the speaker has encoded into the words of an utterance, but a listener who has understood the utterance has gone beyond the literal meaning of the words and grasped the particular sense in which the speaker intended them to be understood.

In plain English what that tells us is that the speaker, and the listener, use and are attuned to a much deeper method of communication when it is verbal. A very recent example of this can be seen in Briana Keiler’s interview with a Trump Campaign Attorney during the presidential campaign when she stated that the polls showed his candidate behind. He asked “what polls?” and she replied, “All of them.” In that sentence she did more than answer a question, her tone overlaid a deeper meaning of ‘let’s be serious here, no bs.” Even if you weren’t watching the body language, the tone of Keiler’s voice conveyed so much more than text on a page could.

Speaking on the phone, if you do it correctly because there is a method, especially in sales, gives you the opportunity to connect and communicate on a deeper level.

Real life communication is invaluable if your goal is to deepen your relationship, whether it be a friend or a business relationship. A lot of work is carried out via digital methods these days. I have clients I’ve had for months and months I haven’t actually met in real life, but I consider that a mistake on my part. Sitting down with someone face to face, even if it’s only for a lunch meeting, changes everything.

Body language, personal chit chat that isn’t focused on business and is ‘off the record,’ can allow you to deepen your relationships in a way that text won’t. I believe it is a given that spending time in the presence of someone is a deeper experience. There nonverbal communications that we all understand. David Matsumoto, PhD was interviewed by the American Psychological Association, and said,

Facial expressions of emotion are universal in the sense that everybody around the world regardless of race, culture, nationality, sex, gender, etc., whatever the demographic variable is, we all show the same facial muscle expressions on our faces when we have the same emotions.

For salespeople, in particular, having the opportunity to communicate face to face where these expressions are available to you is tremendously valuable, in addition to the relationship building. Matsumoto also said,

Well, learning to read microexpressions and nonverbal behaviors, in general, can be very valuable for anyone whose job it is to understand other people’s true feelings, their thoughts, their motivations, their personalities or their intentions…Anybody whose job it is to gain some additional insight about the person that you’re talking with so that you can leverage that information for a particular outcome.

There is no need to belabor the point; getting a face to face meeting, even with existing customers, gives you the ability to have deeper relationships. There is no replacement for it.

I didn’t write this post to make fun of “social selling,” even if snarking on it is fun. Social media is tremendously powerful at opening relationships, but it is part of prospecting, not closing. To get closer to the close, use the phone, get the meeting. It will thrust you miles ahead of those who think they can do it all digitally.